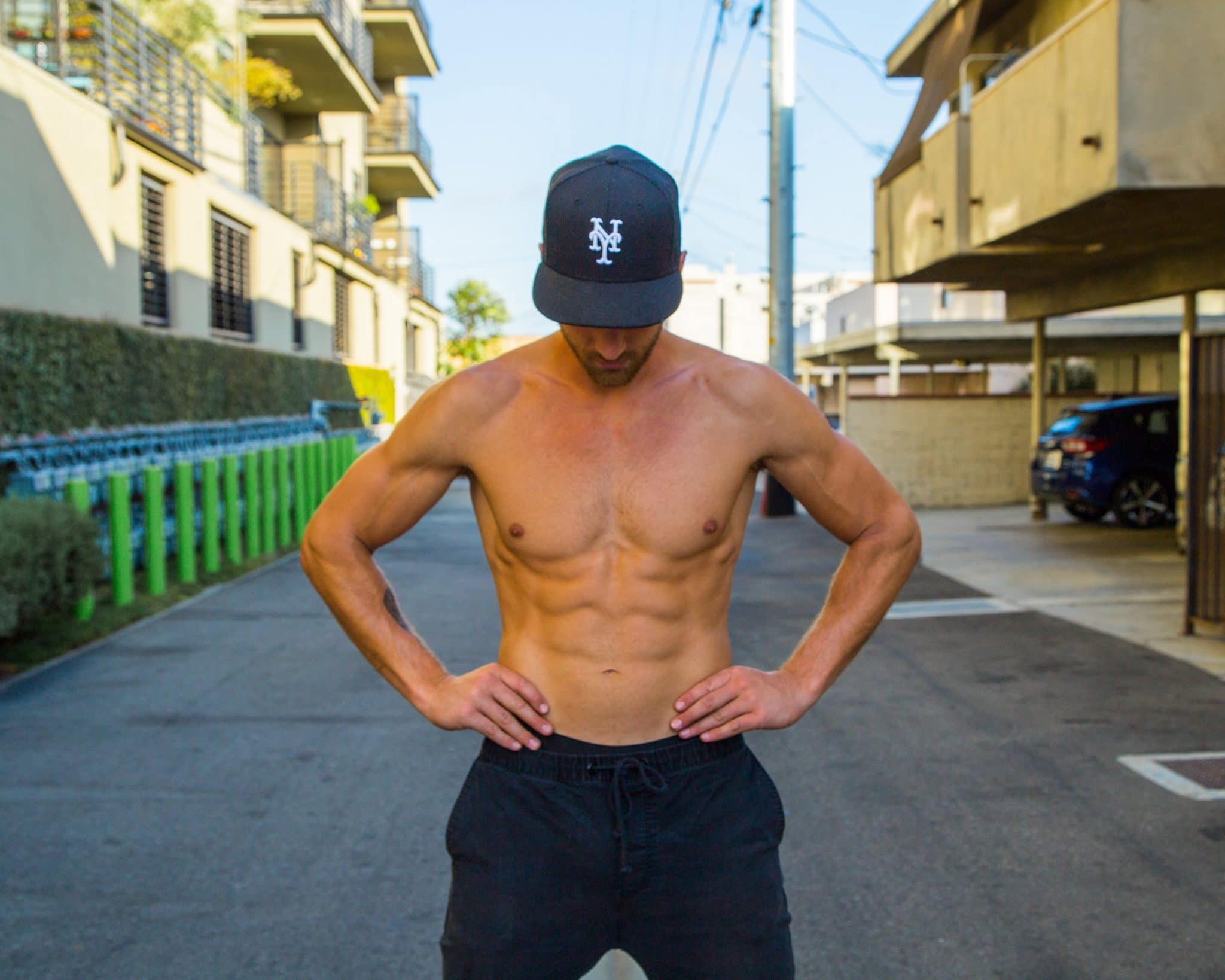 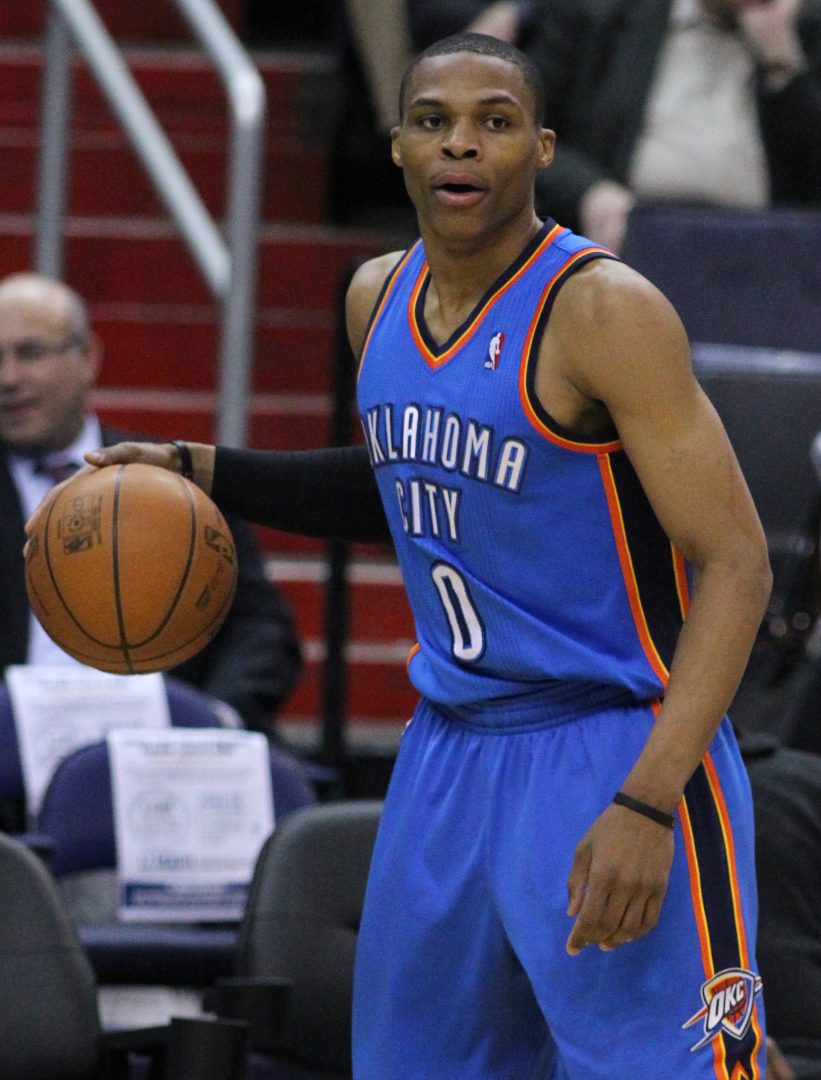 What up Jump Rope Dude Fam?

Today we’re going to talk about how to get a body like Russell Westbrook.

All right guys, a lot of you have been requesting that we do a body breakdown of Russell Westbrook for a very long time. We mention a lot that the ideal Jump Rope Dude physique is a sprinter, a soccer player or an NBA shooting guard. Now, Russell Westbrook is an NBA point guard, but he is exactly the type of person we are talking about when we reference the ideal Jump Rope Dude physique.

So why does Russell Westbrook have a desirable body in the first place. Well, it’s pretty basic. First of all, he has a good amount of muscle mass so he looks very shredded, but he’s not too bulky. This creates a very aesthetic-looking physique where he has enough muscle mass to make him look very masculine, but also a very low body fat percentage to keep him lean.

To state the obvious Russell is extremely athletic, which is another reason why we decided to do a breakdown on his body. He’s not just another fitness model. He’s got an insanely functional body that allows him to compete at the highest level.

Now that we have established what a beast this dude is – let’s dive into his workout regimen. 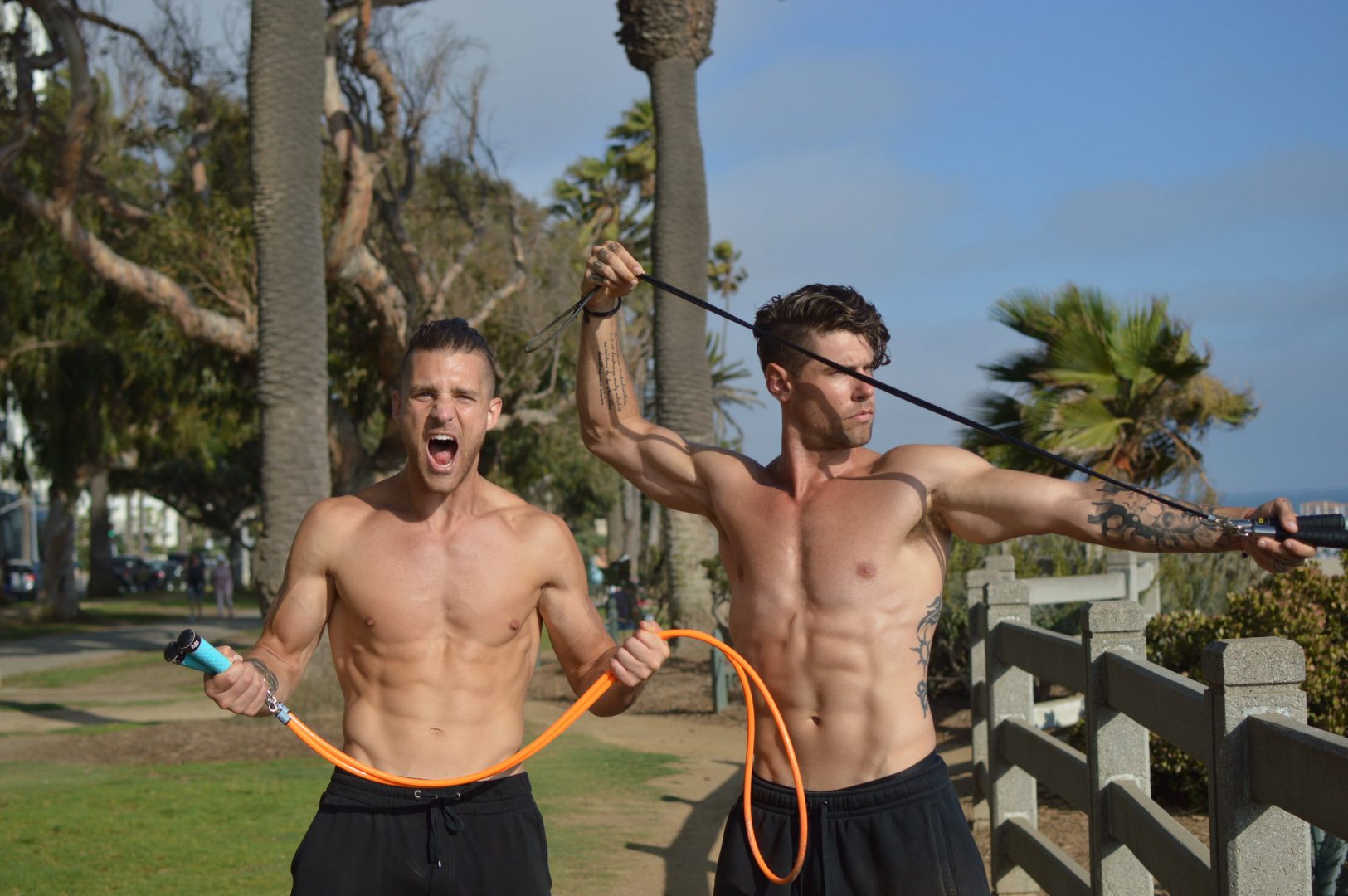 If you search “Russell Westbrook workout” online, you’re gonna figure out pretty fast that most athletes don’t just put all their workouts out there. Or better yet, their trainers don’t just release information about how they’re working out. So the information that we’re gonna give you today is from all the videos that we could find of Russell Westbrook moving his body.

So for Russell’s workouts, the majority of information we could find online is that he does a lot of speed and resistance training. You know those big wind resistors they put on the back of cars for drag races? Well he uses those in most of the videos he has posted online. He’s also focused on doing a lot of basketball training types of workouts and then sprint workouts with pieces of equipment like that.

Now, I understand you’re not gonna go out and buy a huge parachute to use during your workout, so in this workout we’ll give you some tips on how to emulate some of the workouts Russell might be doing himself.

Russell also does a lot of sprints and bodyweight exercises. There’s even video on HBO Sports that shows him creating a workout where the Oklahoma City Thunder are running up dunes of sand. So to put it basically, Russell moves his body a lot and pushes it way farther than the average person does.

We know you want to know if Russell lifts weights. We’re going to be totally honest with you. We’ve scoured the Internet looking for a weight lifting workout that he completed and we have not found one. The only information that we found on this topic was a Bleacher Report article talking about how some of his teammates know that he goes into the weight room and does something, but they never see his workouts.

Having said that, based on his frame, Russell is probably doing some weight lifting workouts, probably mostly in the off-season when he’s not playing hoops. He’s also probably doing a lot of body weight exercises such as pull-ups and push-ups. This dude plays a lot of basketball, meaning he burns a ton of calories. He’s able to be so lean simply because the sport he plays is a sport where you burn a ton of calories. So when you ask us how to get a body like Russell Westbrook, one of the first things we’d say is to go play tons and tons of basketball or move your body so you’re burning a ton of calories and can lose body fat.

A Note About Pro Athletes

The final thing we want to say on Russell Westbrook’s workouts is that you have to understand that people at this level pay millions of dollars to have the best trainers in the entire world. It’s not like you can just search online and find the only workout Westbrook does and find out how many times he completes it per week. The trainers that these guys work with have them doing tons and tons of different exercises depending on if it’s the offseason, the playoffs, and if they have any injuries or are traveling. To be totally honest, you’re probably not going to have the resources that a lot of the greatest athletes have so we’ll give you some tips to emulate their workouts.

Now, if you know and love Russell Westbrook, you know how explosive of a player he is. While that’s great and sells a lot of tickets, he is a guy who is highly susceptible to injury because of the way he plays. Dwight Daub the athletic performance director over the OKC Thunder, put together a workout for Russell that focuses on instability so he can maximize his balance and control of his body when performing at a high level. So without having a list of equipment that Russell uses, we can guarantee that a lot of what he does involves stability balls, parachutes, speed training equipment, bodyweight exercises and a whole lot of running up and down the basketball court. 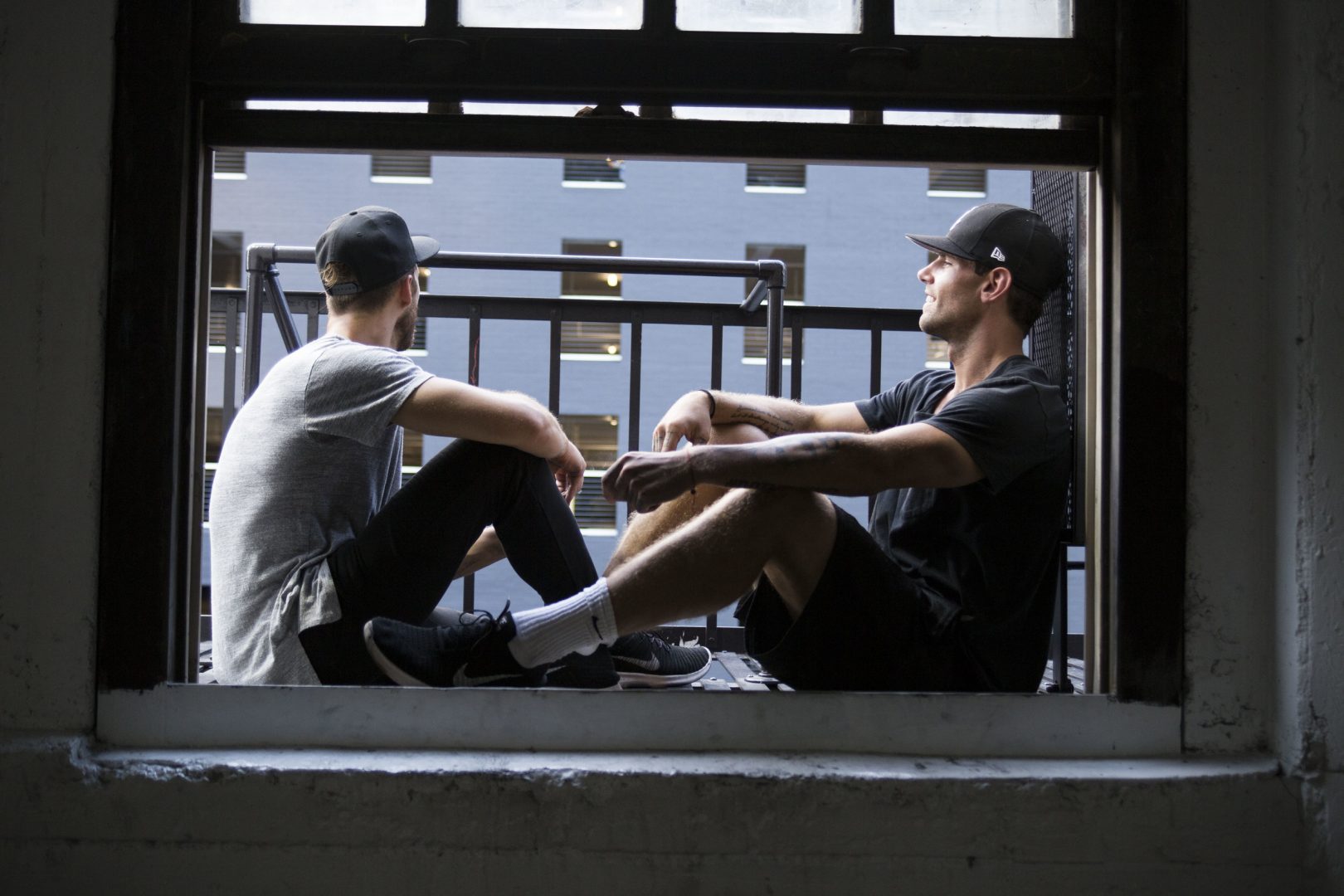 So we looked up some info on Russell’s diet and guess what, there is no specific diet plan. The only information we found on what exactly he eats is that he said on Jimmy Kimmel Live that he eats a peanut butter and jelly sandwich before each game. We love peanut butter and jelly sandwiches because they are a great source of carbohydrates and fat and they taste delicious.

Look guys, we’re gonna shoot straight with you. It’s illogical for us to sit here and say this is exactly how Russell Westbrook works out and this is exactly what he eats for breakfast, lunch and dinner. A majority of the way that he burns his calories is from just being on the court, moving his body and doing the exercises we went over above.

In terms of his diet, we can guarantee you that a player at his level applies the same principles to his diet that we do here at Jump Rope Dudes. We promise you that you’re not gonna find Russell Westbrook eating a ton of McDonalds, pizza, ice cream and all that good stuff. You can probably bet that he’s eating a lot of lean meats, vegetables, fish and whole foods and very little processed foods. He represents Six Star Pro Nutrition foods so he may use some of their proteins or branch chain amino acids also. In terms of his diet, he’s eating just like a lot of other NBA players including Kevin Durant, Kyrie Irving and Lebron James do. They eat real food with a good breakdown of protein, carbohydrates and healthy fats.

At Jump Rope Dudes we also talk about counting calories to get the physique you want. Russell Westbrook doesn’t need to count his calories because of the amount that he is moving. If you’re 25 and working in an office and can’t move your body that much, you should count your calories. That’s the easiest and most efficient way to make sure you’re losing the proper amount of body fat to reveal that lean and ripped Jump Rope Dudes physique.

If you need help figuring out how many calories you should consume, check out our Calorie and Macronutrient Calculator. Plug in your information and it’s going to tell you exactly how many calories to eat and how many grams of proteins, carbs and fats you need to consume as well. If you want a specific diet, we’ve laid that out for you in the JRD Nutrition System. We give you 30 recipes that taste awesome and are super easy to make. As an overall strategy, eat real food and don’t overeat.

What You Can Do

For the best strategies for working out to get a body like Russell Westbrook, you want to be doing high intensity calorie burning workouts. The best thing for that as you know is jump rope. If you’re a beginner, start doing our jump rope workouts 2 to 3 times a week and complete them to the best of your ability. Don’t worry if you can’t complete the whole thing at first, that’s totally fine. Once you’ve completed 2 to 3 workouts a week for about 4 to 5 weeks, then you can work up to doing these workouts 4-5 times per week. Again, focus on going as intense as you possibly can to achieve the highest calorie burn.

Guys, we saved this part for the very end because we want to talk about the biggest reason why Russell Westbrook was the MVP. It’s because he is so damn tenacious. Russell Westbrook screams like a maniac when he dunks a basketball and gives it his all because this dude really cares. His teammates say he is consistently in the gym before anybody else and even when they try to beat him there, they never do. He is a workaholic and if you want to achieve any physique, you need to be just as tenacious. Do the things we outlined here and do them tenaciously until you look the way you want to look. Have a goal in mind and go after it relentlessly. Attack your physique goals and just do the thing!